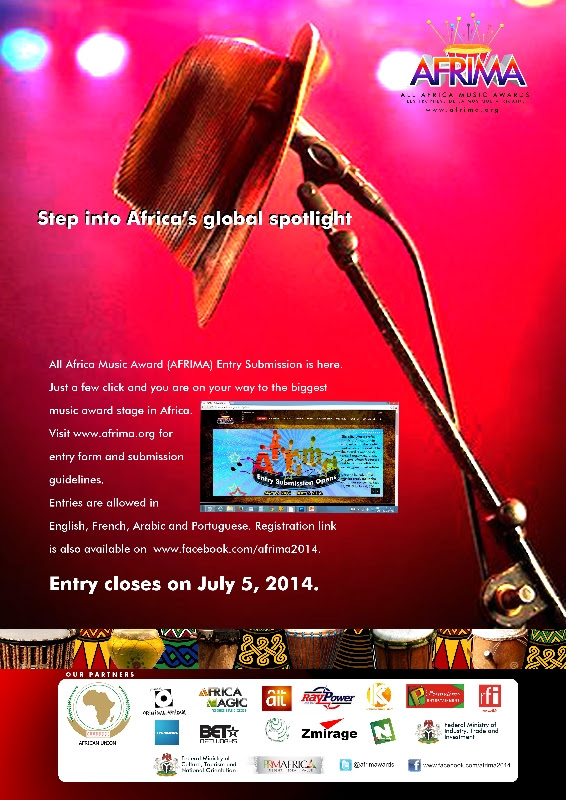 To celebrate the rich Musical heritage of Africa and her talented Artists for the economic growth of the Continent, the International Committee of the All Africa Music Awards (AFRIMA), has opened the Submission of Entries for musical works across Africa for the 2014 edition.

Entries are currently open up to 5th July 2014 and Music Industry Professionals of African origin, living either on the Continent or Abroad, are Eligible to enter for the Awards. Works to be submitted must be Released during the Year under review – 31st May 2013 to 4th July 2014.

Detailed information about Eligibility and the Format of Submission is available on the AFRIMA website.

Entries should be delivered by completing the online Registration Form.

A URL link of the Uploaded work on YouTube, SoundCloud, MySpace and other compatible Platforms, must be included in the space provided on the Registration Form.

Qualified entries will be selected by the Academy of AFRIMA, which consists of the Jury and a College of Voters.

“The Jury comprises of 13 Professionals from Africa’s Music Industry and its Diaspora, but who do not perform or produce songs any more”, said Mr. Ernest Ewane, the AFRIMA Regional Director for Central Africa. “They are professionals with an impeccable understanding of music”.

AFRIMA Co-Producer and Regional Director for Eastern Africa, Mr. Mike Strano added, “After the Jury has performed the duty of selecting qualified Nominations, it collapses into the Academy which consists of 527 Members to Vote for the winners in each Category. In this process of selecting Nominees and eventual Winners of the coveted Award trophy, AFRIMA is very keen to uphold its FACE IT values; which stands for Fairness, Accountability, Creativity, Excellence, Integrity and Transparency. The task of the International Committee of AFRIMA is to ensure that the Academy is not biased along ethnic, regional or age lines in terms of composition. So, there will be equal representation for all music Genres”.

The 2014 All Africa Music Awards will produce a star-studded, world-class event in Lagos – Nigeria between 21st to 25th October, with Live Performances and a Television broadcast to 84 Countries on 109 Television Stations around the World.

Tuesday 21st October: Opening of the AFRIMA Village, where until 24th October, Concerts, Cultural Exhibitions and Carnival displays by Artists from participating Countries around the World, shall feature.
Wednesday 22nd October: A one-day AFRIMA Media Workshop with media Partners and Journalists from Africa and its Diaspora.
Thursday 23rd & Friday 24th October: The Africa Music Summit – a platform for music Industry members to engage and deliberate on how the industry can be nurtured and packaged in a way that contributes to the GDP of the Continent. The Theme is “Reviving the Business of Music in Africa”, with distinguished Panelists.
Saturday 25th October: The 2014 All Africa Music Awards Ceremony.