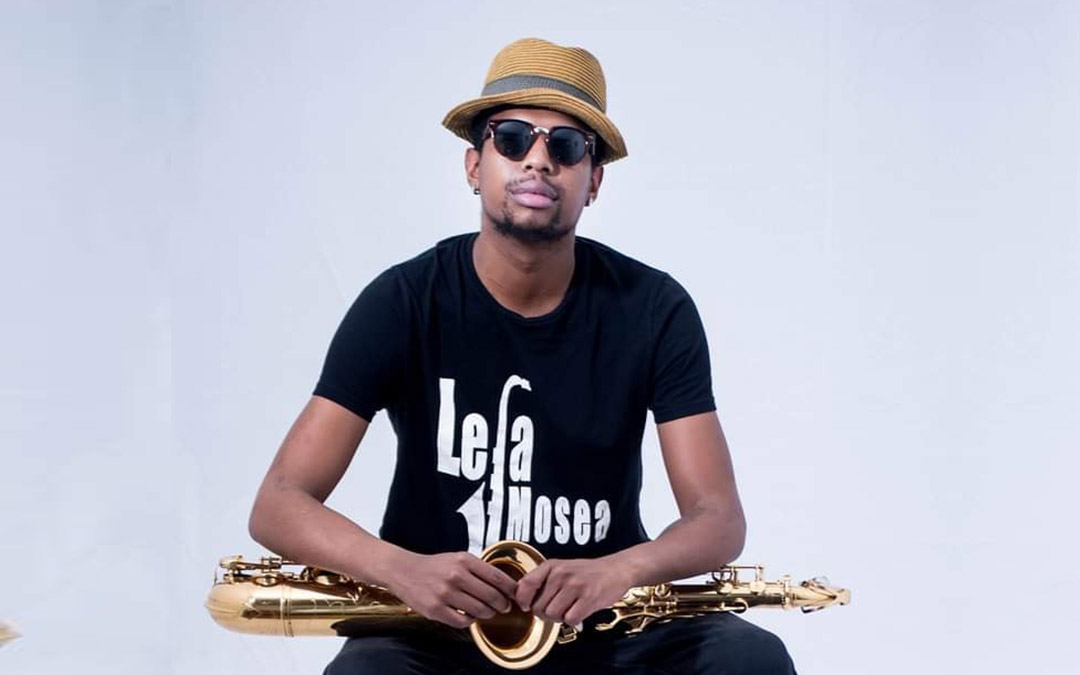 Lefa Mosea is a saxophonist. Born in the Vaal Triangle (Sebokeng) to the south of Johannesburg, he later moved to Pretoria, where his musical talent was awakened as a teenager when he began music theory and guitar lessons in 2003, which with the guidance of his teacher he continued with guitar through to his final school year in 2005.

He then joined the Vusi Mahlasela Music Development Foundation (VMMDF) at the State Theatre in Pretoria, where he was introduced to the saxophone, an instrument he was always fond of but because of lack of necessary finances he couldn’t get his hands on, but through the foundation, he was offered the chance of learning to play it and has never looked back. In 2008 Lefa Mosea enrolled at Nelson Mandela Metropolitan University (NMMU) in Port Elizabeth in the Eastern Cape. Leia studied towards his Jazz Degree Bmus(ed).

Through his stay in Port Elizabeth, he met up with young musicians and formed the band ‘Take Note‘. In 2011 the band got its first break and was signed by Native Rhythm releasing the album “Rear Window”. The band managed to play on big national events sharing stages with the likes of Wynton Marsalis, Tutu Puana, Hugh Masekela, Sibongile Khumalo, and McCoy Tyner to name a few. Due to business matters ‘Take Note’ asked to be released from their contract with Native Rhythms in 2013 and went on to record a second album with an independent investor. ‘And The Journey Begins’ was released in 2013. As the only Sesotho speaking member of the band, Lefa brought a different sound to the band’s music as all the other members were isiXhosa speaking. Lefa’s musical background and influence can be strongly heard on songs like ‘Ramasedi’, ‘Sebogo’, ‘uThandoIwam’, ‘Fuse Blues’ to name a few.

After playing with ‘Take Note’ for so many years on different stages and with different artists such as Mam’SbongiIe Khumalo, MHO, Asanda Bam, Pu2ma Tiso, Nomfusi among others, Lefa decided to embark on a solo career in early 2015 forming his own band ‘Lefa Mosea & The Double Standards Quintet‘ performing mostly his compositions from his ‘Take Note’ days as well as fresh material he is constantly writing. The 28th of February 2015 marked a very special day for this energetic saxophonist as it is the day he first presented his debut solo work as a show entitled ‘My Life, My Journey, My Mistakes’ at Port Elizabeth’s Athenaeum.

After this, Lefa went on to headline the jazz stage at the prestigious Grand Hotel Port Elizabeth where Reason (the South African hip hop star) and IQuIah (Jamaica) were the other headline acts performing. Apart from having his own set! with his band, Lefa was also given the task of putting together a horn section made up of himself, trombone, and trumpet players to back up most of the acts playing at the festival including IQuIah. Lefa showed his versatility to switch from jazz to any genre by doing this with a well-respected Reggae band TheAzania and arranging horns for reggae music. The festival served as Lefa’s first official festival booking as a solo artist, he then went on to play at the National Arts Festival 2015 Fringe program with two times SAMA nominee Nomhle Nongongo (as her saxophonist) before playing with his own band at the same festival where he had sold-out shows for three consecutive days. In August 2015 Lefa was also featured at the st Annual Nelson Mandela Bay Cultural Festival where he shared a stage with the likes of Ringo, Zonke Dikana, Busiswa, Professor just to name a few. Again later in December 2015, Lefa was booked for the 4th Annual Ebubeleni Music Festival in Port Elizabeth. He shared a stage with the American steel pan sensation Andy NarreI, as well as Thandiswa Mazwai, Zahara, Moneoa, RickyRick, L-Tido, Dr. Victor, Donald, and Nathi Mankayi.

In July 2016 Lefa registered his own company, Dipuo PR & Entertainment, offering services including production, PR, artist management, songwriting, and arrangement. In August 2016 he was invited to perform in Botswana on the Two Cities Tou, and also performed at the 5th annual Marat’yane Afro Fest. In October of the same year, he supported Msaki and the Golden Circle, Tresor, and Mobi Dixon at TGE POSEGA All White Event in East London.

Mosea released his debut single ‘MabeIe‘ and enjoyed some huge national media coverage thanks to this hit single, making waves on both national and community radio stations. Lefa was accepted at the National Arts Festival 2017 Edition where he showcased his album as a whole and officially launched the hit single over a period of five days with four Shows. Lefa went on to tour Lesotho in December 2018, sponsored by Concerts SA as he was one of the recipients of their mobility fund for the SADC region, dazzling audiences in the mountain kingdom with shows in Maseru at the Victoria Hotel, Kingdom lounge, Cassies, and more. The young artist also became a resident act, performing on the last Sunday of each month at News Cafe Port Elizabeth (Sun International Boardwalk).