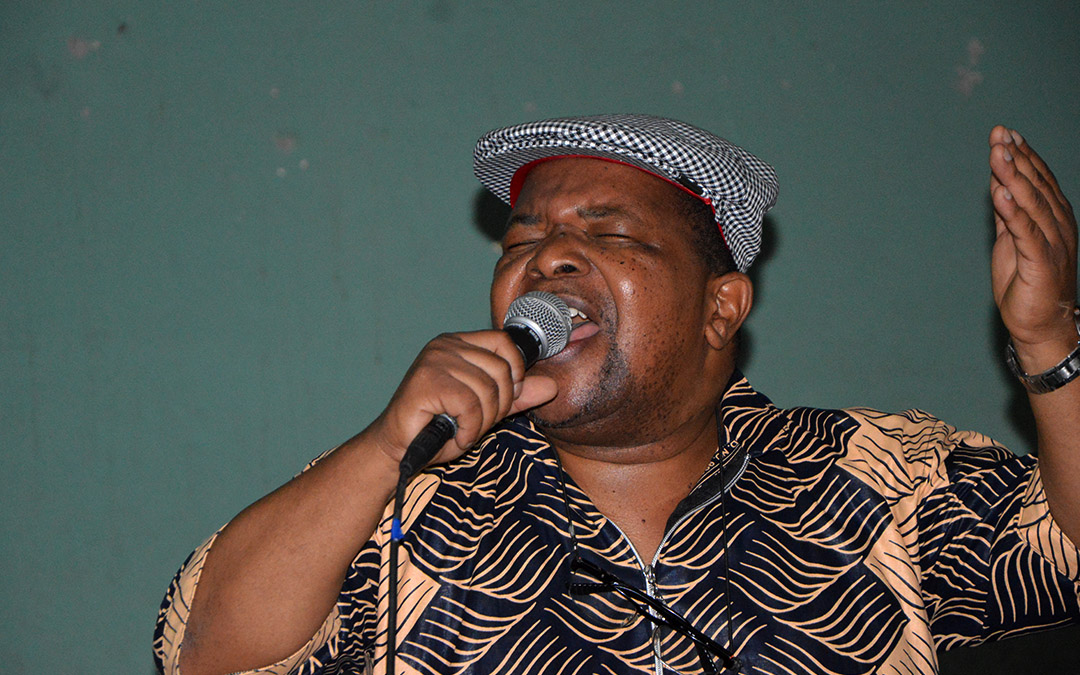 Tony Fanequisso was born in Maputo on June 1st, 1960, son of Timóteo Fanequisso Nyambir and Ana Augusto Pango Nyacumba, and weeks after his birth he went to live in Inhambane.

His interest in music started when he was still a child when he wrote the song ‘Pasiar una uya’, which means “go for a walk but you will come back home”, a reference to the time his grandmother used to go out looking for food, leaving him alone at home since there was only the two of them.

He lived his childhood in the Santare neighborhood, until 1970. This neighborhood was home to many renowned local singers, such as Feola, Magid Mussa, Jaco Maria, Camal Givá, Dua, and Adamo Mequidade, among others. But it was Mrs. Assisa’s sons, Suamado and Badru, who really awaken the interest for music and percussion instruments, the desire to sing the romanticism of Feola and the drums of the Santare Carnival, as well as to play in the band of the Inhambane City Hall.

He was greatly influenced by the popular songs of that time from Feola, Jaco Maria and Lalarita, and interpreted many of their songs, such as ‘Gina unga lili’, ‘Hana Nga nyi haladza’ and ‘Garota para mim não é nada’. The influence of these artists in his music life can be seen in the song ‘Nyinagumana hai’, from the albums ‘Hongoleni Nyembani’, of the band Som Índico, and Saudades.

On these two albums, you can hear the influence of Lucky Dube’s reggae music, on the songs ‘Hongoleni Nyembani’ and ‘Usiwana’ from the ‘Som Índico’ album, as well as on the song ‘Singindringindri’ on the album ‘Saudades’.

Back in 1977, he was part of the first group of Mozambican students in Cuba at Isla de Pinos, which later became known as Isla de la Juventud. Here he was part of one of the music bands made up of students from Samora Machel School, the ESBEC 36, where he interpreted songs from Mozambican singers such as Feola, Fany Pfumo, Gabriel Chiharu, among others, and played musical instruments.

It was during this time in Cuba that he got involved with the Cuban rhythms, a mixture of African, Spanish, French, and American jazz rhythms, among others. The Cuban salsa, the rumba, the mambo, the tango, the conga, the bolero, the cha-cha-cha, the guajira, the merengue, the guaguancó, among endless many others rhythms fascinated him. All these rhythms are based on percussion instruments.

As a result of this influence, we find in Tony Fanequisso’s music an abundance of different sounds of Cuban and African percussion instruments.

Upon his return to Mozambique in 1980, he was assigned to the 8th Motorized Infantry Brigade in Chókwé, Gaza, where together with other military colleagues created a group that brightened up many official and social events in the town of Chókwé, performing songs of Magid Mussá, Camal Givá, Fany Pfumo, Silvio Rodrigues and Steve Kekana, as well as his own.

Still, during the ’80s, he co-founded the band Som Índico, remaining in the band until now. He often offered his house for studio rehearsals and had the chance to work with Eugénio Mucavel, one of Mozambique’s most successful musicians, who joined the group as drummer.

He recorded songs for several artists and for the band, with highlights to the album Hongoleni Nyembani (let’s go to Inhambane), released in 2015. He wrote 4 songs for the album namely, Hongoleni Nyembani, Maie ni Bhabe, Nyinagumana hai and Usiwana, the latter one was recreated in the album Saudades with the title Singindringindri.

In 1984 he joined the band Os Inimitáveis and worked with the musician Magid Mussá, as a result of an encounter at the Agrarian School of Chókwé. He remained in this band until 1986.

From 1994 to 1996 he was the Head of the Cultural Research Department at the Archive of Cultural Heritage (ARPAC), where together with the musician Luka Mucavel and researcher João Vilanculo worked on traditional Mozambican music.

During the time he worked at the central bank of Mozambique he was the coordinator of the bank’s musical band since 1998. In this band, he interpreted songs from local singers, as well as his own songs. He directed the Cultural Center of the Banco de Moçambique from 2011 to 2016, developing cultural and sporting activities. He also organized cultural events with the participation of renowned local musicians.

In 2015, a group of friends, Arlindo Munguambe, Elvino Nhantumbo, Victor Cossa, Faftine, suggested he record a solo album to preserve his creations and challenge the market. Tony Fanequisso took the advice and went into action recording the album Saudades, with music producers and arranger Elvino Nhantumbo and Ismael Chicache.

Since most of the songs from the album Saudades are popular songs that were often played at various events until the mid-70s, he counted with the support of his grandmother, Luzimira Malawene, and of his mother, for the reconstitution of the lyrics and, in some cases, the melody of Inhambane. This work can be heard in the lyrics of Mwama Mbara, Singindringindri, Hongoleni Nyembani and Lúcia.

Other lyrics came from his poems and, one, in particular, ‘Sobe e Desce’, from the collaboration of one of his friends, the late Antonio Pinto de Abreu, with whom he studied in Cuba and was later a colleague of at Banco de Mozambique.

The album ‘Saudades’ is made up of 11 songs, 10 of which are in Bitonga, an effort to preserve the local languages which are part of the national heritage.

Domingos Gove wrote the following about this album: “…I felt Inhambane in all its fullness and depth. Not for the Bitonga but for the message and for habits and customs that it transmits.”