ETV are rolling with Mandoza! 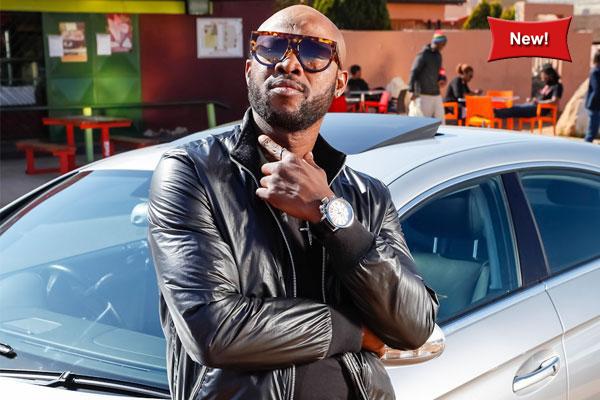 The reality show Rolling With… returned to e.tv on Sunday, 22 September at 6:30PM and features, Kwaito star Mandoza, best known for his hit single Nkalakatha.

Ask anyone on the streets if they know the track, Nkalakatha, chances are the response will be positive, complete with dance gestures. But who is Mduduzi Tshabalala?

Roll with the real Nkalakatha aka Mandoza and bear witness to his re-invention as he embarks on the journey to record a new album. In 13-episodes, the show bares his frustrations and successes, as well as pressures and realities of being a husband, father, businessman and artist.

“After two successful season of the Rolling With… reality series, we are excited  to roll with Mandoza and zoom into his life. The Rolling with…series has had a loyal audience following since it was launched in 2011. Rolling With Mandoza is destined to entertain. It’s a real personal journey of revival and shows a different side of Mandoza.  Our viewers will enjoy getting to know Mduduzi Tshabalala,” says Monde Twala, channel head of e.tv.

Can the real Nkalakatha please stand up? Watch the thrilling first episode on Sunday, 22 September at 6:30PM.

Meet the family: Mdu, Mpho, Tokolo, Tumelo and Karabo – his immediate family, attends church and then go to Soweto and have family lunch with his mother.

As a sought after performer Mandoza lives on the road, and is away from his family alot. The trade-off for his chosen career path is many goodbyes. His family wishes him well as he travels to Cape Town to begin his album recording.

Mdu reunites with his original producer, Gaby Le Roux, this is the man that was there when everything started, and he was the architect of Mandoza’s signature Kwaito sound. The reunion is also an opportunity to innovate on this sound, with a recording with Afrikaans Rock outfit – The Heuwels Fantasties.

Still in Cape Town,  Mandoza tells the story of one of the scariest moments of his life, when he went snorkeling with Mpho. He will confront his fears by going shark cage diving.

His manager and friend, Curwyn has been with Mandoza from the beginning. They share a relaxed relationship and Curwyn is Mandoza’s go-to man, when it comes to career decisions.

Mandoza goes into the studio with Spikiri to record a collaboration for his album. This studio is noticeably different than the studio in Cape Town.

Mandoza is invited by a prisoner at Leeuwkop prison, where he spends the morning with some prisoners.

Mandoza has scars that he’s paid a heavy price for, and these have made him stronger. He has been stabbed and he’s been involved in a car accident. But 2013 is the year of living healthy. He is eating right and training hard! Meet Smorden – his bodyguard and personal trainer. The guys hit the gym and sweat it out, away from the stresses of public life.

Mandoza is in the studio with Hydro. Mdu and Mpho go and watch Tokolo’s final rugby game at school.

Mandoza’s public persona is the face he puts on when he leaves his family.  There’s a strong contrast between the showman and the father and husband at home. Mandoza tests the waters of his new album at Razzmatazz.

Inspired by the Orlando Towers, Mandoza dares his friends to bungee jump. And appears as a guest on the popular soapie Rhythm City. Mandoza and Mpho go shopping for a special dress for the South African legends launch.

BIO: Who is Mduduzi Tshabalala?

Mandoza, undoubtedly one of South Africa’s most talented, aspiring and successful cross-over artist.

Born in Zola, Soweto as Mduduzi Edmund Tshabalala, he is best known as Mandoza, his stage name. Mandoza loves cartoons and named himself Mandoza, after a cartoon character dog, Mendoza.

After a brief run-in with the law, Mandoza, inspired by music all his life, made a decision not only to become a musician but to change the lives of people by delivering messages through a South African born genre of music called “Kwaito”. Beginning his career with a group called “Chiskop” and releasing 5 albums brought lots of fame, awards and success to the group but also lots of focus on Mandoza with his unique husky voice.

In 1999 Mandoza decided it was time to release his solo album called “9 II 5” with the hit single Uzoyithola kanjani” inspiring his people to get out of their comfort zones and do something with their lives. In 2000, Mandoza’s career took off with the mammoth hit album “Nkalakatha”  selling over 10 times  platinum and winning numerous awards. Mandoza became the first black South African Artist to crossover to all nations in the country and became a major role model to his fans.

Mandoza became the first Ambassador for the Nelson Mandela 46664 concert, and has been invited to many countries such as Germany, Egypt, Belgium, Australia, London, French Isles, Uganda, Tanzania, Namibia, Botswana.