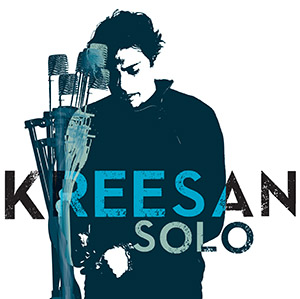 Music industry pioneer Kreesan has released his new album Solo, his first collection of new material in 7 years.  The 10-track album sees Kreesan, known for his hits Be Brave and Get To Heaven, break away from his usual rock genre and touch on themes that include elements of pop, dance and strong piano. Solo features Mauritz Lotz on guitar, Kailin KKP on drums and Byron Keeno on backing vocals.

“I took a soul searching hiatus from the music business and am excited to be back with an album of songs that reflects everything I have been through and achieved in the last few years,” said Kreesan, who worked with producer Mauritz Lotz on putting together the upbeat anthems, pop songs and power ballads that make up Solo. “I am finally happy to be giving my long standing and loyal fans an album that they have been waiting for and am very confident that they will enjoy the same quality they are used to with my music, but a different direction production wise.”

The first single off the album was Be In Love, which was released earlier in 2013 and received airplay on many South African radio stations. The follow up single, the up-tempo Hands Up has been dropped in time for the launch of the album.

Mention the name Kreesan to any South African and the words “great artist” spring to mind. The Durban-born singer songwriter first broke onto the local music scene in 1993 and had an esteemed 5 hits off his debut album including the ballad I’ll Still Follow You and the raunchy single Be Brave. Other familiar hits include Spider, How I Wish and If I Get to Heaven.

Not only was Kreesan respected amongst both local fans and the music industry as a whole, but word got out internationally about his talent and he toured as support act to some huge names including Richard Marx, Mike and the Mechanics, Bee Gees and Vaya Con Dios and to name a few. One of the highlights of his career was sharing the stage with Roberta Flack in a performance to former president Nelson Mandela.

Songwriting is another area where Kreesan absolutely shines.  Aside from writing hits for other artists, his music was used in the controversial television series called The Line and also in the sound track to the Val Kilmer film, A Ghost in the Darkness.

Kreesan was a hands-on ambassador for the Music for Children Foundation where he dedicated a lot of his time in between his music ventures.

After a hiatus of self-discovery in order to reflect and define his musical direction, Kreesan is back with a fresh new sound. He took time out to look back on his life’s trials and tribulations and this comes across strongly in his new material. His latest album is entitled Solo and is was released in late 2013. The first single off this album was Be In Love, which was released in winter 2013. The follow up single is Hands On, which is an up tempo track released in time for summer 2013.