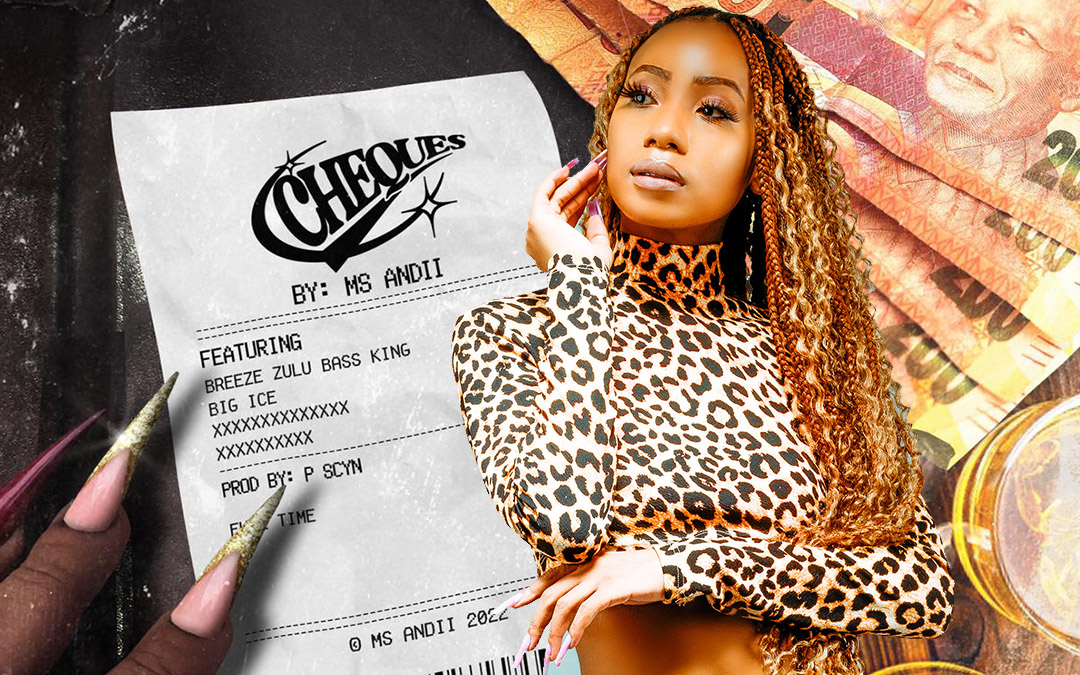 It’s safe to say that every time Ms. Andii, Breeze, Big Ice, and P Scyn come together a banger is made. The Moneybag squad has done it again and this time the song is titled “Cheques”, release date 11.02.2022. The exciting part about CHEQUES is that it will be accompanied by visuals shot by award-winning director, RealN*ggaZuluMan from Skystar Films. ‘Cheques” is out now on all major digital platforms.

The song talks about how people should pay artists for their time and craft. The Moneybag Squad has decided that from now on, time is money and they need cheques for their work. The song is very relevant as it is an apparent trend in the music industry, especially hip hop, to pay performing artists with ‘exposure’.

Ms. Andii, a hip-hop artist from the city of Durban, formerly a dancer, began her journey as a recording artist in 2015 and has since been dropping bars in the booth and on stages across the nation. Her single titled Moneybag is currently playlisted on Gagasi FM, DYR radio, Sportscene Radio and made it to Number 1 on 5fm’s “The Stir Up” hosted by Ms. Cosmo. In April 2021, Ms. Andii dropped her debut EP titled “She Is King: MoneybagBaby” on which she had her lead singles “Moneybag” and “Bad Ballerina” her now known aliases. Cheques is the next single she is delivering to the people, to get the people motivated and amped for 2022 as she prepares for the next project that she will be dropping in late March titled “She Is King: No Ice Boiz” produced by Audio Simz( producer of 2021 hit “Mntase”).

“Honestly I feel like Cheques is Moneybag Part two. I think it is officially tradition for myself, P Scyn, Big Ice, and Breeze to make a banger in January. Well we did it again and I see it being bigger and better this time” – Ms. Andii

“Cheques came about again as we always meet early in the year at Skylight Stu with Ms Andii Pscyn and Big Ice. The right beat, as usual, was played by Pscyn and I immediately came up with the hook as Ms. Andii is in different energy this year we thought why not speak of where she is going in her rap career which is a success. We both worked on the hook then the verses came in easy when we finally got the hook, we knew we needed that different trap voice in the song and waited for Big Ice to add that sauce on the last verse. A monster beat from Pscyn is the perfect way to start the year.” – Breeze

Big Ice, born Njabulo Nxumalo, is an energetic artist with a unique voice that makes music for the I love of it, most of his music is his life story which is inspirational, motivational and tells what he plans to do with music as well as his goals. Big Ice has shared the stage with A few industry giants, the likes of Nasty C, Okmalumkoolkat, Tellaman, Zakwe Blxckie just to name are few. In 2020 the rapper released a project titled Reincarnated, on which he featured respected artists Lordscript and Breeze Zulu Bass King. A few songs he has been featured on have aired on popular radio stations such as Gagasi Fm, DYR, 5 Fm, Khosi FM, and on Television channels like Trace, MTV Base, and Channel 0. The single Boss’d Up from the ‘Reincarnated’ project rotated on Gagasi for 4 weeks. In October 2021, Big Ice release a drill track titled “Move” featuring Lord Script, P Scyn And Breeze Zulu Bass King. The talented rapper has a favourite saying that goes “LTTFL” which stands for Leave The Talking For Later. There are rumours that we may be receiving the deluxe version of his ‘Reincarnated” project sometime this year.

“I remember the day Cheques was being recorded I was stuck at work and Ms Andii, Breeze, and P Scyn called me and they told me they working on a banger and they waiting on my verse, I literally had to ask my manager to let me go a bit earlier when I pulled up they literally had a banger and same time I asked where’s my verse and I jumped on and when it was done everything fit perfectly… I think we make a great combo whenever we come together… Money Bag proved it!”

P Scyn [peacesign], is a record producer, recording artist, songwriter, and audio engineer from Durban, South Africa. He established his own recording studio in 2018 called Skylight Studio s where he started recording artists from in and around Kwa-Zulu Natal, to eventually having the records he worked on play on major radio stations and Television around South Africa. P Scyn is behind the full production of “Bad Ballerina” and Ms. Andii’s upcoming debut EP, She Is King: Moneybag Baby. P Scyn dropped an EP titled “No Ordinary Juice” in 2020 along with a few hot singles from various artists and now it seems he is starting 2021 with a bang, one can only wait and see what this talented engineer has in store for us this year.

“Going into the session I had a couple of beats prepared for Ms. Andii. We were reaching for something hard-hitting but also melodically unorthodox, much like what I was hearing when I was listening to Ye’s new album “Donda”. For some time I had been searching for new production techniques when it comes to making Hip-Hop records. And for the first time, it felt like I got it. I can’t wait for people to hear Ms. Andii’s new record. And of course, it is always great having the opportunity to present the idea with the entire Money Bag Crew.” – P Scyn