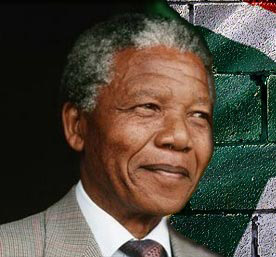 As we mourn the loss of South Africa and in fact the world’s beloved Tata Mandela whom we call Madiba.

Heroic in his deeds, graceful in his manner, sainted in his image, Nelson Mandela long served as both cause and muse in the entertainment community.

From the 1960s, when he was a political prisoner and South Africa  was under the laws of apartheid, right up to recent times, when the racist laws of the land had fallen and he was among the world’s most admired people, Mandela inspired concerts, songs, poems, fiction and movies.

Artists were equally drawn to the man and to what he stood for. During the more than quarter-century that Mandela was jailed, his freedom became synonymous with the freedom of his country. Songwriters and poets invoked his name in calling for apartheid’s end and an artistic boycott of South Africa.

But just as South Africa managed a peaceful transition from apartheid to democracy, Mandela evolved from opposition leader to head of state to sage with remarkably little damage; he only seemed to gain admirers.

The greatest father there ever was: this is how South Africans will remember the man who brought an end to apartheid and delivered our nation from the brink of civil war.

The loss of this great statesman, philanthropist and revolutionary will be mourned, but his life and legacy will be remembered and celebrated for centuries to come! Rest in Peace Tata!