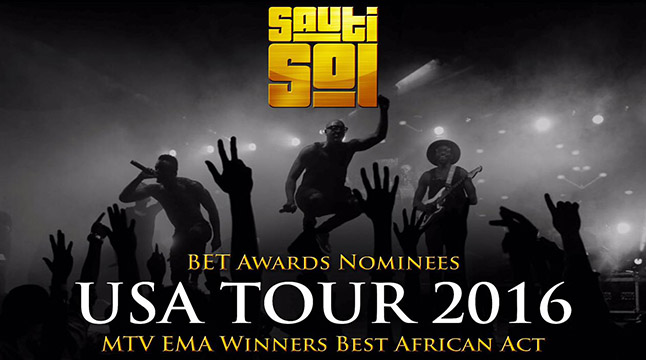 Kenyan music group Sauti Sol has been crowned Africa’s Best Group at the just concluded MTV Africa Music Awards in South Africa held last Saturday 22rd Oct 2016 at the Ticketpro Dome. They were the only East Africans who won an award at the ceremony – guaranteeing East Africa with the Best Group MAMA title for the next year.

Sauti Sol was also nominated in the categories of Song of the Year, Best Collab and Artist of the Year. It was the first time for Sauti Sol to clinch the coveted and highly competitive award for Best Group. However, they have previously won an MTV Europe Music Award for Best Act in Africa in 2014.

Speaking in South Africa right after the win, Sauti Sol thanked their management, fans across Africa, friends and media who made the win possible by delivering strong votes for the Best Group award, where they were nominated alongside Toofan (Togo), Navy Kenzo (Tanzania), Mi Casa (South Africa) and R2bees (Ghana).

Sauti Sol said, “Winning the Best Group award is a career highlight for us, and the East African music industry as a whole. We’ve been working hard and consistently at our career for about seven years straight. The past year was a big one for us with the release of our self-produced third album: Live and Die in Afrika. We also staged our first nationwide tour that is now onto a global scale. We thank our fans, friends and family for believing in us and loving our music. We also love to thank the media across Africa for showing us their support during our road to MAMAs 2016. To all the other nominees in our category, we salute you! Let’s join hands in making Africa’s music industry better and bigger,” adding, “Thank you MTV for putting up such a grand celebration of African music and achievement.”