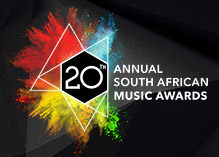 After ceding defeat to The Soil for Best RnB, Soul and Reggae, Sheer Publishing client Kabomo became the man of the night at the 20th annual South African Music Awards held at Sun City, after winning Best Male and making his amazing speech of triumph encouraging the youth to never give up.

Although she was unable to attend the awards due to the tragic passing of her brother, TS Records Zahara still made her presence known by taking the Best Selling album and Best Female awards.
Congratulations go out to Sheer Publishing’s very own producer extraordinaire for the hard work on the Zahara album and Best Newcomer winner Naima Kay.

Sheer Publishing is also very proud of the hard work of Sbongiseni Mbhele for his contribution on the Best Selling DVD by Joyous Celebration.

But truly the night belonged to the comeback group of the year, Mafikizolo. Sheer Publishing represents half of the duo (Nhlanhla Nciza) through TS Records, and were very proud proud to see the group take eight (8) awards on the night including Best Pop, Best Collaboration, Best Group or Duo and Best selling full track download.

Congratulations to all the winners, we are very proud to be associated with your amazing work.