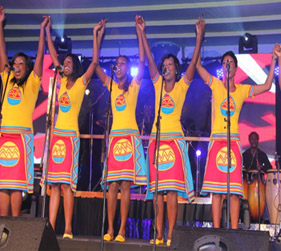 This group has proved that not only can gospel be lively and entertaining but it can draw a multitude of young people closer to the Lord. Initially only performing as a church band, the music sung by Worship House transcends any gender, cultural or social boundaries, and any other barriers which serve to separate the children of God.

The band comprises of 35 members and has not only brought pride to the surrounding communities but the band members are seen as role models by the youths in their communities and draw their success from the support of this very same community.

Worship House has grown into a major force in the Gospel music industry. From its humble beginnings, they have grown into a force which can be reckoned both locally and internationally. They’ve so far recorded 13 Albums, each year it records two separate live albums. Within the relatively short span of time of Worship house’s existence, they have achieved substantial highlights and have graced venues and events of substance and stature, among them are: