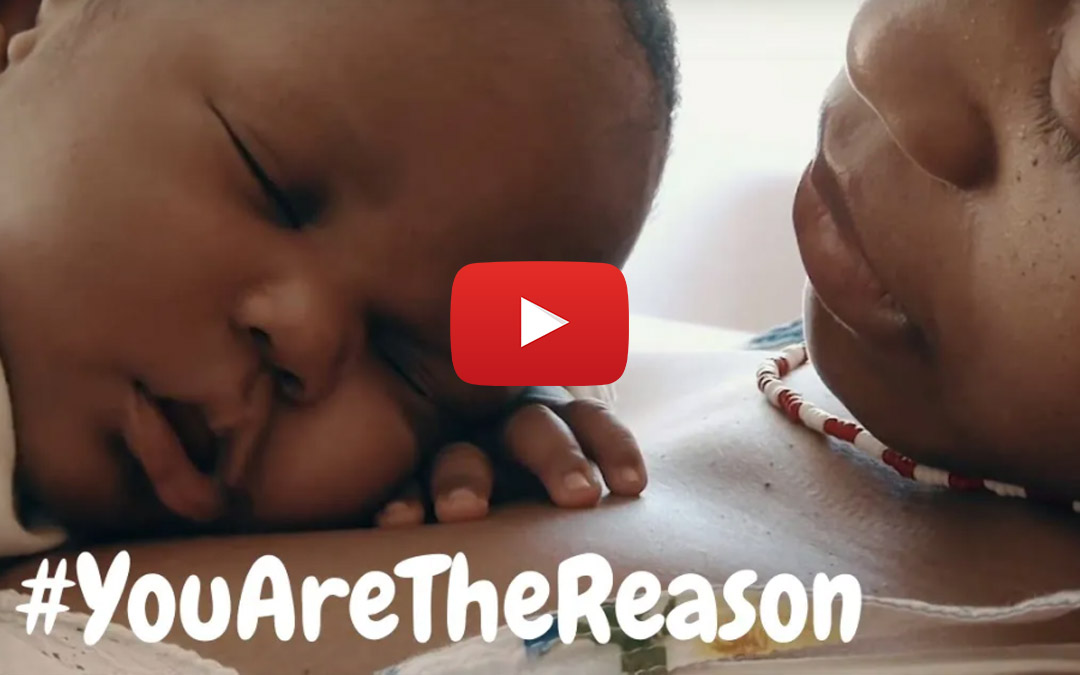 Using the power of music, the emotive video #YouAreTheReason was launched as a national campaign in support of maternal and infant mental health, introduced at the virtual symposium “Prioritising mothers, infants, and healthy beginnings”.

This virtual webinar was hosted by The Gauteng Association for Infant Mental Health (GAIMH-SA) and the South African Civil Society for Women’s, Adolescents’ and Children’s Health (SACSoWACH).

The aim of the webinar was to impart knowledge regarding the importance of supporting both maternal and infant mental health and includes reputable speakers such as Professor Salome Maswime, Dr. Lavinia Lumu, Salisha Maharaj, and Dr. Anusha Lachman, culminating with the broadcasting of the #YouAreTheReason music which launches the national campaign.

#YouAreTheReason has taken the Calum Scott original song, re-arranged and produced by Dan Selsick, vocal arrangements by RJ Benjamin with powerful and heartfelt vocals by Chantal Stanfield, Ziyanda Yako, and Nicole Canin. The music video has been filmed and edited by Custom Content Collective.

The #YouAreTheReason campaign is the brainchild of Nicole Canin, Chairperson of the GAIMH-SA, and is presented along with Dr. Astrid Berg, President-Elect of the World Association for Infant Mental Health.

How did #YouAreTheReason come about?

Attending a conference in 2019, an idea was sparked in Nicole Canin’s mind when Dr. Astrid Berg mentioned an anecdote by Professor Daniel Stern, a prominent American psychiatrist who specialised in infant development. He remarked that “a rock concert would have a greater impact than additional research, to convince parents of how important mental health is for caregivers and their infants in the first 1000 days after birth.”

As someone who has spent the last 15 years working with the families of young children and infants, as well as someone with a deep love and appreciation of the power of music, these comments made a profound impression on Nicole.

A few days later, while listening to the radio, she happened to hear the Calum Scott song ‘You are the reason’. Even though the words were written as a love song, if seen through the lens of a mother and baby, they powerfully conveyed what it might be like for a mother who wants to feel close to her baby, but is struggling to.

Canin explains; “I thought about the mothers I’ve worked with that are depressed, anxious or traumatized and can’t bond with their babies – even though they desperately want to. Having worked in private hospitals as well as community clinics and government hospitals – with mothers of all cultures and socioeconomic brackets – I felt that there was something quite universal about this experience.”

Viewed in this way – in song, the baby becomes ‘The Reason’ that the mother will do everything she can to get help so that she can connect with her baby.

Canin continues; “I started to think this might be the basis of a very powerful campaign aimed at supporting mothers across the country. It felt very important that rather than shaming mothers, the campaign aim to de-stigmatize some of the challenges faced by mothers. I felt that music would be a very powerful medium for this, as it has universal appeal, is non-threatening and capable of conveying very powerful emotions.”

The aim of the #YouAreTheReason National Campaign

GAIMH-SA is an NGO that focuses on promoting the optimal development of infants with a particular focus on their mental wellbeing. GAIMH-SA is an affiliate of the World Association for Infant Health. One of their key focuses is therefore the parent-child relationship during the first 1000 days.

The organisation has spent the last year preparing for a campaign to facilitate support for mothers. The aim of the campaign is to use social media, and the medium of music, to create awareness and attempt to de-stigmatize the challenges faced by mothers, which may at times rob them of their ability to bond with/take care of their infants.

They want to promote the idea that motherhood is not always the fantasy society makes it out to be, and many mothers feel overwhelmed, inadequate, anxious or unable to cope. Up to 1 in 3 of mothers in South Africa suffer from conditions such as post-natal depression, debilitating anxiety or trauma. They want to promote the idea that this can happen to anyone, regardless of race or socioeconomic status, that it needs to be taken seriously, and that it can be treated.

Part of the campaign will be to direct mothers to where support is available nationally in the public, private as well as NGO sector.

Nicole Canin has been deeply moved by the support and generosity of the various creative artists who came on board to be part of the #YouAreTheReason Music video.

She states; “I wonder if this project would have been possible in any other country in the world. I have been blown away not only by the talent that we have in this country – which looking at what we have put together, feels world-class, but also that these talented artists gave of their time to support the mothers of this country. I have had this same experience in the marketing arena, as I sought advice and guidance about how to put a campaign together and was supported by so many.”

Dan Selsick, producer and music arranger for #YouAreTheReason, adds his thoughts; “Being part of this project has been an extremely rewarding process. Knowing how debilitating the effects of postnatal depression can be, it gladdens me to think my small contribution might in some way be meaningful and make a difference to some people’s lives.”

Selsick continues; “Furthermore and on an artistic level, working with such talented singers and musicians has made for a very rewarding experience and one that I will treasure for many years to come.”

Chantal Stanfield and Ziyando Yako, the other two vocalists on #YouAreTheReason, jumped at the chance of being involved.
Says Chantal; “Being part of the #YouAreTheReason campaign is so important to me as a new mother – I didn’t deal with post-natal depression but I was fully aware of its existence and both my husband and I knew and read-up on the potential circumstantial triggers, especially with most of my family far away from me. I hope the campaign helps all mothers, equips them and their wider family to look out for changes in behavior, and is able to link them with the support that is so needed.“

Ziyanda adds; “Being part of this campaign has reminded me that I belong to a very large community of woman, who have done their very best to protect their children and families through these scary times”

Nicole Canin concludes; “I am proud of this initiative, and of the talent and generosity of the South Africans we have interacted with – all of whom clearly value the mothers of this country and, like me, believe in supporting them. I await, with great anticipation, the response the music video will receive from the public at large.”

With additional gratitude to:

• SACSoWACH, the Western Cape Association for Infant Mental Health and the Perinatal Mental Health Project, who assisted us with resources and networks.
• Mama – Creative talents from the incredible agency that helped us create a visual identity and campaign strategy
• Babyyumyum – a premiere online parenting portal, for supporting the project and helping to promote the campaign.