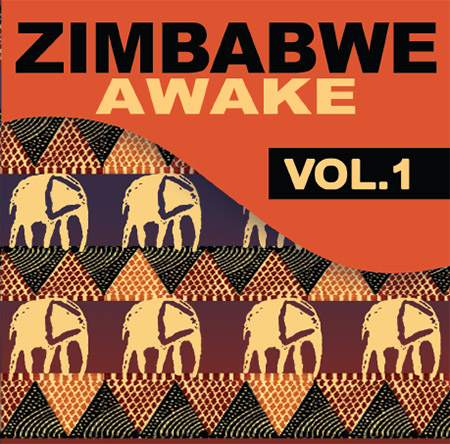 ‘Zimbabwe Awake Vol.1’ is the sixth, and most recent release in the Africa Awake CD series.

With a focus on exposing current songs and favored artists from various countries, Zimbabwe Awake Vol.1 follows in the footsteps of fellow compilations from Ghana, Benin, Cameroon, Nigeria and Togo; and while each of these albums has elements of value, in my opinion this is definitely the finest!

It’s a quality album filled with music that remains true to its origins while still being accessible to an international audience. Perhaps this ‘easy-appeal’ is due to the ‘type’ of music featured here, because throughout there’s an acoustic feel – whether mbira, vocal or guitar-driven, all the songs have an authenticity, untainted by the assimilation of US-styled beats or an overly-compressed production sound.

As a collection of contemporary music from Africa it’s proof that popular culture can exist without artistic compromise and still remain relevant; and it’s especially impressive, considering the challenging environment and developing industry, from which these artists have emerged.

Their success is clearly a result of hard work and commitment, as evident in the remarkable skillfulness and musicality displayed on these tracks, and confirmed by each of their individual achievements.

Opening with a celebratory song by Edith Katiji, one is instantly captivated by her vocal authority, so its interesting to discover that besides being the singer, songwriter and leader of the band, Utonga, she’s actually best known for being one of her country’s foremost bassists – a particularly remarkable achievement, because it was previously considered ‘taboo’ for females to play this instrument.

Driven by her personal experiences in overcoming such obstacles, she has become an outspoken activist and campaigner for Women’s rights and issues.

There are others in this group that support similar causes and are equally active; and it’s this kind of social consciousness that permeates their creative expression, and touches the ‘human’ in each of our hearts.

It’s also exciting to hear so many talented artists of ‘the next generation’, and to know they’re making music with a message!

This quality is again exemplified on the second track, where the sweet seduction of Victor Kunonga’s voice and electro-acoustic fusion supports his commentary.

Singing in Shona, Ndebele and English, he represents his community, spreading universal messages; and earning him national respect as the ‘symbol of Zimbabwe’s new generation’.

Also considered as one of the leading voices of the ‘now’ generation, is the multiple award-winning, hugely popular Alexio Kawara. Like Kunonga, he brings together drum-programming with live instrumentation, as evident in his track “Chipo Changu” – blending eras with guitar eloquence, both these artists make modern music that tributes tradition!

This is echoed on other tracks, like the young Norman Masamba’s “Unorumwa”, and on Bongo Love’s “Voice of the Voiceless” – both reflect a deeply rooted, updated expression, which honors their musical legacy.

Actually this quality extends throughout, as the region’s distinctive guitar-driven rumba style is seamlessly integrated across the album; and since it ‘wouldn’t be Zimbabwe’ without the ancient call of mbira, this too is wonderfully woven into the mix.

Bongo Love created their style called “Afrocoustics” by blending modern guitar riffs with mbira and other indigenous instruments; and likewise, the multi-instrumentalist Josh Meck fuses the ancient and new – he plays mbira, kora and bass with fluency and his irresistible charm is reflected here in “Uye Uye”

This integration features again on “Famba Pore Pore”, a track by Adam Chisvo, who throughout his lengthy career, was committed to promoting the versatility of the mbira and extending its role beyond the ceremonial – even following his death in 2011, he remains at the forefront of ‘mbira fusion’.

Of the younger generation, Taku Mafika was credited as ‘the fastest rising mbira maestro’. His contributions as an artist and teacher were enormous, and sadly interrupted by his untimely death, but the honesty and warmth of his expression lives on in tracks like “Musikana Wa Pa Nexdoor”.

“My aim is to positively influence the mindset of the African youth in a global world torn between tradition and modernity. I want to impact on social issues affecting us as Africans”, said Taku, who used his music as a social mirror.

Also representing the region’s rich vocal tradition, with its signature call-and-response style, are artists like the powerful Prudence Katomeni-Mbofana – she sings with such strength and authenticity, that her messages seem to transcend the limits of language. Here her versatility is featured on two tracks – “Dzidza”, a song from her debut album, and again on the legendary Filbert Marova’s hit track ‘Mandenga’.

An icon of Zimbabwean music, Filbert has been at the forefront since the ‘80’s as a songwriter, musician and producer, and his work remains just as relevant today, even when featured alongside young artists like Rute Mbangwa.

As a rising star, Rute remains committed to paying homage to Africa’s musical heritage, updating it with relevant lyrics and contemporary elements from global cultures  – here encapsulated in her celebratory track “Kumaginde”.

In Southern Africa, there’s often a fine line between the definition of jazz and ‘African’ music, but one artist that could easily convince even the most skeptical connoisseur is Dudu Manhenga.

Her music is ancient, contemporary, urban, ethnic and all that is in-between – essentially its ‘Zimbabwean World-Jazz’!

Since starting her band ‘Color Blu’ in 2001, she has graced the globe with her potent presence, and this track “Kutheni” shows the dignified delivery of Dudu’s voice and overall musical mastery.

Also worth mentioning are the afro-jazz duo, G56 – here acoustic guitar meets flute in a world-fusion style, founded in the common dream of two artists who first met at University.

Then to sum it all up, there’s the soulful sincerity of Anderson Mamimine’s tribute to his country; and crucial to completing this collection of Zimbabwean contemporary music, is the inclusion of a reggae track – representing this popular genre is a worthy piece from the rising star, Mathias Julius.

Julius’ recent hit “Twenty Ten’, features Oliver Mtukudzi, and albeit second-last on the album’s playlist, it seems to successfully brings the album full circle – its almost as if the presence of Mtukudzi [an internationally acclaimed African artist and Zimbabwean musical hero], serves symbolically as the final endorsement of a thoroughly enjoyable experience…

Each of these artists is a treasure and every track a gem – overall, ‘Zimbabwe Awake vol. 1’ is a truly inspiring album!